Last Thursday, I availed myself as a guinea pig for a research project that is being conducted by the UB Department of Communicative Disorders.  The project is headed by Dr. Kristi Buckley and includes graduate students, Christina Lobarinas and Jennifer Pyo.  The goal of the project is to determine if 1 ear is better than 2.  I am one of those subjects where they are testing bi-lateral CIers.

I arrived promptly at 5:00 for what would be four hours of torture and abuse for me, fun for them!  In all seriousness, the three are the most nicest and dedicated researchers I have ever met.  Every 15 minutes, they checked to make sure if I wanted a break of not.  We did go non-stop except for the break where they had to fit me with a skull cap and load it up with a saline solution.  And of course, they ended it with some of the best pizza (Zetti’s) I have had since arriving in Buffalo, 16 years ago.  And in between, I got to see old re-runs of Get Smart.

The tests involved the standard tonal hearing test, the HINT test with words and sentences and the single syllable word test.  Each ear was done one at a time and both together.  And finally, came the brain response test.   The tonal testing was done with and without my CIs.  AMAZINGLY, I do have residual hearing left!

They fitted me with a skull cap that was filled with a saline solution.  The cap is designed to capture brain waves to determine how the brain responses to noise stimuli and whether it behaves differently with one ear at a time vs. both ears.  The graph that came out of the test looked like something from an earthquake.   In this test, two tones were presented at random.  one sounded like “bong” and the other “bop”.  I had to press the button on the “bop” tones.  I swear, I could have fallen asleep!  But they did warn me that it would be quite boring. 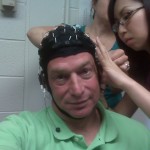 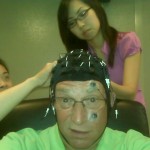 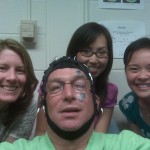 Although they said I did very well, I did notice some very interesting observations:

All in all, I really had a blast and am looking forward to being a guinea pig again especially if they feed me that pizza from Zetti’s!